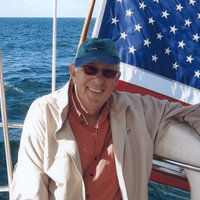 Babush Corporation founder passes away at 89

William J. Whitcroft was promoted to heaven April 8, 2019, at Newcastle Place, Mequon, WI. Bill was born June 27, 1930, to Olive (nee Holland) and Clarence Whitcroft in Detroit, MI, and raised in the suburb of Birmingham. He is preceded in death by his parents, sister Doris (nee Whitcroft) Rogers, and brother Frederick Whitcroft.

Bill attended Purdue University as a Naval Reserve Officers Training Corps (NROTC) recruit, earning his Bachelor of Science in Mechanical Engineering in 1953. He served in the United States Navy from 1953 to 1956, then as a Navy Reservist until 1966.

“Big Bill” loved life and lived large. A true “man of the sea,” he enjoyed sailing, powerboating, fishing and cruising the world with his beloved wife, Kathleen (Kuffel) Whitcroft. His second home was the Milwaukee Yacht Club, where he enjoyed many friendships. A hole-in-one in high school sparked his lifelong passion for golf, which Bill reignited in retirement in Naples, FL. The gulf waters of Florida called him too. Friends and family spent many a day boating on “Seascape,” captained by Bill. Throughout his life, he collected American antiques, and followed world politics and the stock market. Anchored in his faith, Bill actively participated for 52 years in his local church, North Shore Congregational, Fox Point, WI. He was a flag-waving American; his love of God and country, unwavering.

Above all, Bill loved his family dearly and cherished his role as father to Andrew (Cathie) Whitcroft and Elizabeth (David) Whitcroft; stepfather to Jenny (James) Marino, Melissa Doerr, and Chris (Eden) Doerr, Jr.; and “Gramps” or “Grampa Bill” to seven grandchildren and great-grandchildren, who are grateful for the many adventures, holidays, and life lessons he shared with them.

Bill is forever in our hearts. His mantra will be remembered by all…Love yourself.

A private celebration of life will be held at a later date. In lieu of flowers, please consider making a donation to Wounded Warriors United of Wisconsin www.woundedwarriorsunitedwi.com or Special Olympics Wisconsin www.specialolympicswisconsin.org