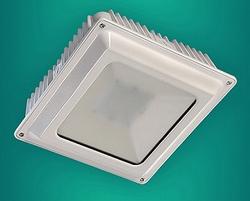 The company’s existing lighting system consisted of 17 high-output T12 and T8 fixtures of 4 tubes, each consuming 115 watts; with ballasts using 30W per fixture, the setup demanded over 8330 watts of energy to operate. We replaced the older technology with 13 LED high-bay luminaires at 200W each, offering a brighter workshop illumination with almost 70% less energy consumption,” says Mark Jarel, LEDtronics Street & Outdoor Lighting Product Sales Manager who is himself an avid sports car collector. “Using a total of only 2,600 watts, the LED lights saved the company 5,730 watts.”RTM Lighting & Electronics oversaw the installation.

An unexpected additional benefit Mr. Honsowetz has encountered is due to the fact that LED lights produce minimal heat as compared to their fluorescent or incandescent counterparts — notorious for wasting energy in the form of heat. “At our location here in Van Nuys we do experience outside temperatures over 100 degrees,” he says. “With LED lighting, the interior temperature on hot days is easier to control.” Van Nuys is a Los Angeles suburb that sits in the middle of the heat-prone San Fernando Valley.