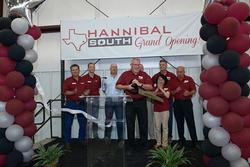 Hannibal Industries, Inc. welcomed material handling leaders from all over the country to the grand opening of its new Hannibal South pallet rack manufacturing facility located on 6501 Bingle Road in Houston, Texas.  The more than 150 event attendees included industry executives, media, Hannibal Industries employees, representatives from the state senate and county commissioner as well as the Chamber of Commerce.

In the true southern hospitality that the region is known for, each attendee was greeted with a Mason jar full of iced tea and offered a tour of the facility’s steel fabrication mills.  The festivities were held in the new Hannibal South state-of-the-art powder coating building, and party-goers enjoyed hearing their favorite country hits by Ryan Harris and the Killin’ Time Band.

“Hannibal’s strategic expansion into the south has been years in the making,” said Blanton Bartlett, Hannibal Industries president.  “Houston’s location has a lot to offer Hannibal Industries’ business, and it will allow us to provide additional value to our partners and customers.”

Just before the official ribbon cutting to open the new Hannibal South facility, event attendees were the first to see this new Hannibal Industries video: https://youtu.be/dZ2kztQbJfA

Between Hannibal Industries steel tube and rack businesses, the company has historically manufactured and shipped more than 120,000 tons of steel products from its Los Angeles location to its customers annually.This volume has served customers in all regions west of the Mississippi River, and via the port of Los Angeles, has reached as far as Asia and the Middle East.

With increasing demand in the southern and eastern portions of the country and beyond, Hannibal is officially opening its new Hannibal South facility with the goal of providing additional value to existing customers and increasing its business globally.Hannibal South will be able to produce an additional 40,000 tons of steel pallet rack for industries including food and beverage, home improvement, warehouse distribution, retail, archive storage, automotive and 3PL providers globally.