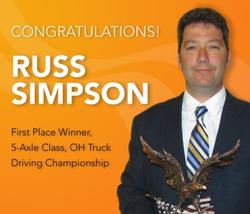 Holland professional driver Russell Simpson took the top award at the 2013 Ohio Truck Driving Championships, winning first place in the 5-axle class. The competition was held May 4, 2013, at the IX Center in Cleveland. It included more than 150 contestants from 24 companies across the state. The competition recognizes drivers who demonstrate exemplary safety focus, equipment awareness, and driving skills. His win qualifies Simpson to compete at the National Truck Driving Championships (NTDC) which will take place August 20-24 in Salt Lake City, UT. “Russell is the epitome of everything that makes Holland great,” said Scott Shaffer, Columbus Terminal Manager. “He approaches each day with enthusiasm and has one of the most positive and gregarious personalities I have ever worked with. Russell is a true professional, and I can think of no better employee to serve as the ambassador for Holland at the NTDC.”

Simpson has competed in truck driving competitions since 2008, accumulating an impressive record. In his first year of competition, he earned the first-place prize in the 5-axle category at the Ohio Truck Driving Championship, and was also named Ohio Rookie of the Year. In 2009, he took fourth place in the tanker class, and just last year took second place in the 5-axle category. Simpson has been driving professionally for 27 years, 21 of which he has spent with Holland as a city driver out of the Columbus, Ohio facility.

When asked why he competes, Simpson said, “I really enjoy the competitions. I’ve met some great drivers and friends. More importantly, competing in these events is my way of improving my skills and showing respect for the company by giving back the best way I can.”

“Safety in and of itself is always a top priority but drivers like Russ make Holland the industry leader it is today,” said Scott Ware, Holland President. “His dedication to safety is also a commitment to service as he continually delivers his customers’ shipments damage-free and on time,” added Ware.

To qualify for state competitions, drivers must have a one-year accident-free record. First-place winners in each class earn an invitation to compete at the annual National Truck Driving Championships hosted by the American Trucking Association. This prestigious event, commonly referred to as “The Super Bowl of Safety” includes a written exam, pre-trip inspection, and driven obstacle course.