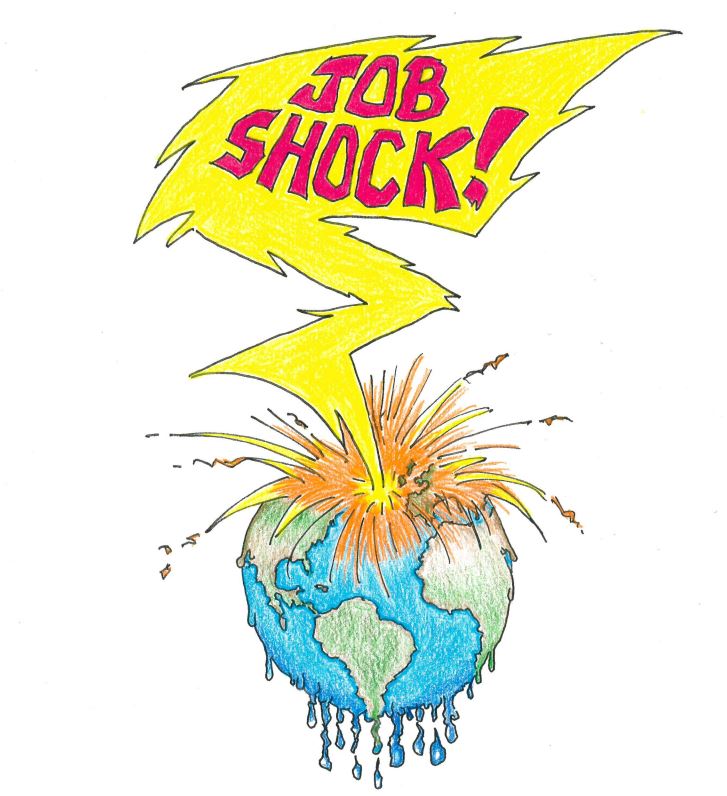 It is already apparent that as COVID-19 restrictions ease, pent-up demand for many types of goods and services will be unleashed. As businesses reopen or expand to meet this boom, the demand for skilled workers will soar. It is not likely to fall for the rest of this decade. As cited in prior “Job Shock” segments, a major demographic shift, serious education deficits, and rising job-skill demands have combined with COVID-19 to undermine the quality and composition of the U.S. labor force.  An April 2021 National Federation of Independent Businesses survey found that 44 percent of small businesses had job openings they could not fill, a record 22 percent higher than the 48-year average for this survey. Ninety-two percent of businesses seeking workers reported few or no qualified applicants. The U.S. Bureau of Labor Statistics reported that there were a record 8.1 million job openings at the end of March 2021. We estimate the true number to be over 11 million.

COVID-19 has greatly increased the need for skills training. The shift to remote work has placed new skill demands on many employees. Because of the pandemic’s devastating effect on certain industries, about 20 percent of U.S. workers have left their former jobs for new types of work. A March Prudential Pulse of American Worker Survey found that about one-quarter of the workers surveyed plan to look for a different job with another employer once the current crisis eases. All these factors indicate that employee training must be greatly increased.

A significant shift in the priorities of American businesses is urgently needed. In recent years business expenditures on training and education have declined. For every dollar America’s chief foreign competitors invest in employee talent development, U.S. business invests only 20 cents. Training is mostly concentrated on managers and professionals. Only about 20 to 30 percent of U.S. employers have offered entry-level job training or provided employees with training updates. Much of what is now done is mandated by safety regulations. It is not about building new skills.

A recent McKinsey Global Survey found that 69 percent of businesses were doing more skill-building than they did prior to the pandemic. However, only 28 percent of these organizations had a training department or similar facility focused on learning. The organizations that employed a variety of education/training methods reported a higher rate of success in reskilling and upskilling their employees.

Even though COVID-19 has greatly increased the need for entry-level training and reskilling, many businesses are again expanding stock buy-backs and increasing dividends rather than investing in worker skills. American companies and organizations instead need to launch new HR initiatives to fill skilled job vacancies and upskill their existing employees through a variety of means including corporate universities and training partnerships.

Job Shock will have a major economic impact in the United States and globally. In 2030 estimated U.S unfilled jobs range from 25 to 30 million. Globally over 95 million jobs could be vacant. The financial costs for individuals., businesses, and nations will be staggering. By 2030 U.S. GDP loss could be over $2.5 trillion. Global losses might reach $18 trillion.

Job Shock: Where Do We Go from Here?

The picture that emerges from before, during, and after the COVID-19 crisis is an American workforce with an abundance of people, but a shortfall of talent for the jobs of the Fourth Industrial Revolution. An analysis of the composition of the U.S. labor market at the beginning of 2020 and projecting what it might be like in 2030 if the education-to-employment system remains unchanged shows: 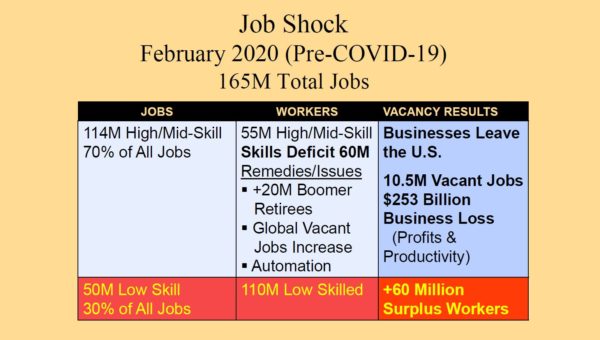 Seventy percent of jobs (114 million) were high to mid-skill. Only 55 million workers were qualified. The result was a 60 million job deficit. American employers tried to fill these vacancies with retired baby boomers, workers brought from other countries, foreign students attending U.S. universities, and/or the increased use of automation. Companies unable to find skilled talent moved their jobs abroad.

Thirty percent of all jobs (50 million) were lower-skilled. There were 110 million workers at that level, i.e., with limited math and reading competencies. The result was a 60 million worker surplus. Many gave up looking for a job (and thus were not counted as unemployed) because they were not offered entry-level job training. 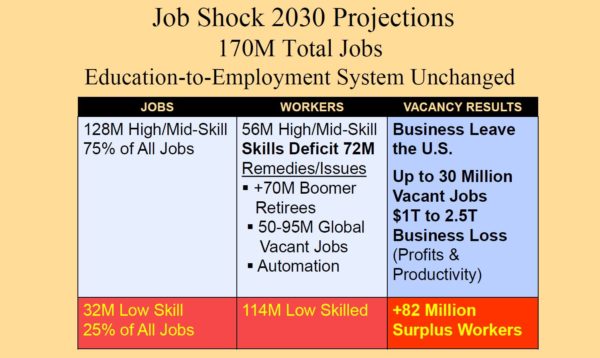 At least 75 percent of jobs (128 million) will be high to mid-skill. Only 33 percent of American workers (about 56 million) will be qualified for these jobs, resulting in a 72 million job deficit. The U.S. skilled labor shortage will deepen because 70 million baby boomers will have aged out of the workforce, a global 50 to 95 million skilled worker shortage will limit immigration to the United States, and increased automation will demand ever higher skill levels from workers.  The pace of companies leaving the United States due to skilled talent shortages will rise.

In contrast, 25 percent of U.S. jobs (32 million) will remain low-skill. If education and skill upgrades are not adopted over this decade, possibly 114 million low-skill people will be in the U.S. labor force. A huge “techno-peasant” underclass will compete for a diminishing number of low-skill jobs. High unemployment coupled with mounting skill shortfalls could pose a real threat to American social stability.

An estimated 30 million vacant jobs are possible. The economic loss to the U.S. economy will be between $ 1 trillion to over $2.5 trillion.

We do have the power over this decade to increase the education and skills of American workers. We can produce a workforce that meets the talent requirements of 2030. It does require coordinated actions from key sections of our society. Picture the American talent creation system as a boat with two figures pulling the oars and a third at the rudder. Parents are the rudder steering a better course for their child’s future. One oar is pulled by educators (K-12, post-secondary). The other oar is in the hands of employers providing job training and skill updates to their workers. If one or more of these parties fails at their roles, the boat goes off-course, stops, or sinks from ever-larger job shock waves.

This coordinated effort needs to start at the regional level. Enlightened community leaders need to pull together to keep the boat on course. The COVID-19 pandemic has produced a storm of hurricane proportions making the need for immediate action more vital than ever.

Yet many people across America remain opposed to systemic social changes. They are deeply divided into multiple warring “tribes.” They remain at war with each other rather than working to reach an agreement on vital common goals. Their acceptance of the cold, hard facts of “Job Shock” remains a hard sell.

The longer the United States delays making systemic changes to the education-to-employment system, the deeper the economic and social turmoil between now and 2030. As Lawrence Summers, the former U.S. Treasury Secretary said about employment, “Walk outside: labor shortage is the pervasive phenomenon.”

The next segment of “Job Shock” will focus on how Regional Talent Innovation Networks (RETAINs) offers a blueprint for successfully updating local talent pipelines. We hope to move the public dialogue from confrontation to cooperation.

The monthly Gordon Report Webinars will be focusing on key topics of the “Job Shock White Paper.” For more information on signing up or viewing these webinars, go to www.imperialcorp.com/whats-new/webinars or go to www.MHWmag.com for parts 1, 2, and three of this series. 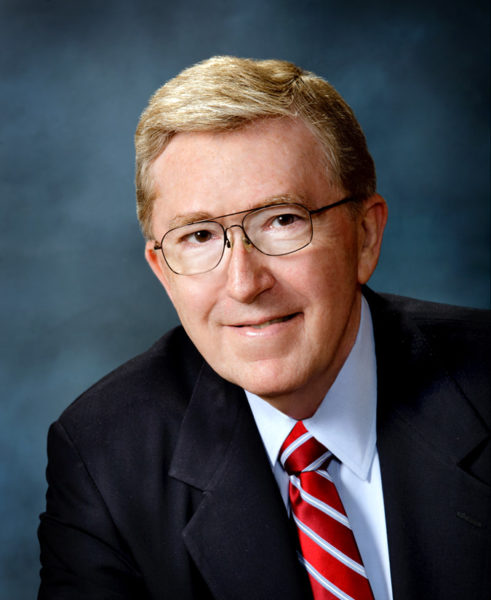 Edward E. Gordon has consulted with leaders in business, education, government, and non-profits for 50 years. Ed is a big picture thought leader connecting the employment dots between business, education, and training. As a historical economist, he applies inter-disciplinary solutions that address the jobs-skills disconnect and related economic development issues. Gordon, the founder and president of Imperial Consulting Corporation in Chicago, is a human capital management expert who is internationally recognized as an authority on how talent delivery systems, career development, and training related to business and economic growth. www.imperialcorp.com 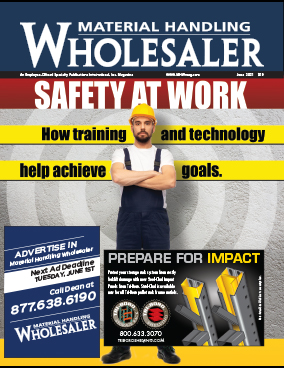