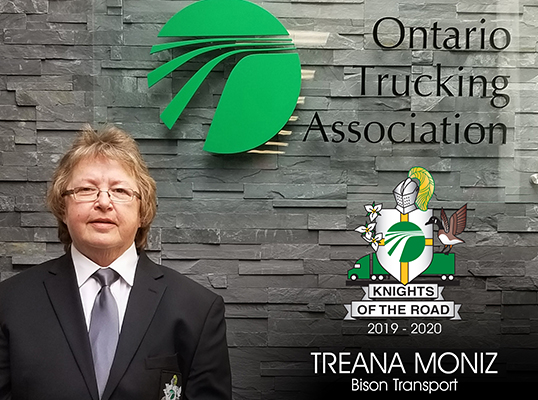 Women In Trucking announces its 2019 May Member of the Month

Women In Trucking (WIT) has announced Treana Moniz as its 2019 May Member of the Month. Treana is a professional company driver for Bison Transport in Winnipeg, MB, Canada.

Although she has been around trucking most of her life, Treana’s desire and passion for trucking started in high school. Just looking at the trucks on the road made her want to drive a truck. She always loved to drive, so she thought, “why not drive for a living.”

Treana is no stranger to the trucking industry. Her grandfather hauled logs with a team of horses. Her Dad worked as a truck driver and a snow plow driver. Her aunt, mother, and grandmother all worked as either cooks or waitresses in truck stops. So, it is no surprise that she also was a waitress in a truck stop before starting her own trucking career.

While she was waitressing, she met a driver that eventually became her boyfriend. He began training her to drive a truck. He had a stroke and couldn’t finish training her, so she attended a truck driving school and received her license in 2007. Once he was cleared to return to work they ran team for about five years.

When things didn’t work out between the two of them, she wasn’t even close to giving up trucking, so she went out on her own. After getting her feet wet with another company, she joined the team at Bison Transport. She has been with the company now for six years. “My experience level grew and so did my career with Bison. I have over 675,000 safe miles and have been a member of Driver Advisory Board for over two years,” she said.

Treana represents Bison at the Truck Driving Championship and participates in the Special Olympics Convoy. She also attends recruiting events, industry trade shows, and schools with her truck and trailer. Treana was named Eastern Company Driver of the year for 2018 and has received Driver of the Month a few times.

In 2018, Treana was selected as a WIT Canadian Image Team member. She is also a member of Sisters of the Highway and Women’s Trucking Federation of Canada. Bison nominated her to be a Road Knight. “Now I’ve achieved one of my goals in trucking. I’m very proud to say that I now represent OTA by being one of their Road Knights,” she said.

Treana added that, “Safety is a passion of mine in this industry. I don’t cut corners when it comes to my job. I give my all to my company and the industry. I truly love what I do for a living it’s not just a job to me, it’s a career. I really like to talk with people about this industry and like mentoring new drivers, helping them anyway I can. I truly look forward to the path God has laid out for me in my career. It has been an awesome journey so far.”