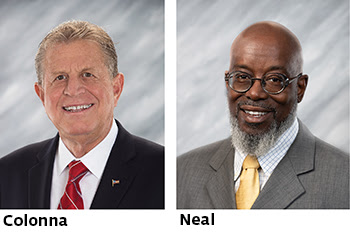 Neal selected as vice president, both set for one-year terms

The five-member board also selected Steven Neal as Vice President and Bonnie Lowenthal as Secretary. Every July, Commissioners select a President and two board officers to serve one-year terms. The Commission’s new officers will begin their terms on Aug. 10, when outgoing Commission President Lowenthal will hand the gavel to Colonna at the Board’s regularly scheduled meeting that day.

Colonna served two terms on the Long Beach City Council, including two years as Vice Mayor. The longtime real estate professional and business owner is currently a member of the board of the San Gabriel and Lower Los Angeles Rivers and Mountains Conservancy. Appointed to the Harbor Commission in 2017, he was elected as Vice President of the Harbor Commission in July 2019, following a year of service as Secretary.

“I am honored to be elected President by my colleagues on the Board,” Colonna said. “I look forward to working with each of them to navigate this challenging time in history and building the necessary infrastructure that will keep the Port of Long Beach competitive, safe and reliable for decades to come.”

The City Charter empowers the Board to set policy for the Port and direct the Port’s Executive Director, who leads more than 500 employees in the development and promotion of the Port of Long Beach.

The Port of Long Beach is one of the world’s premier seaports, a gateway for trans-Pacific trade and a trailblazer in goods movement and environmental stewardship. With 175 shipping lines connecting Long Beach to 217 seaports, the Port handles $170 billion in trade annually, supporting more than 575,000 Southern California jobs.