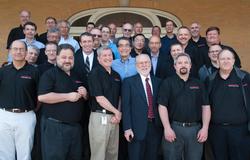 The Raymond Corporation has recognized 19 engineers for their contributions to 32 patents awarded by the United States Patent and Trademark Office since 2012. The recognition event was held at the Sherwood Hotel in Greene, New York, on June 22, 2016, with keynote speaker Lance R. Collins, the Joseph Silbert Dean of Engineering at Cornell University, speaking on the importance of innovative engineering. Michael Field, chief executive officer of Raymond, and other Raymond executives attended the event, which recognized the dedication and hard work of the people whose product developments and processes have received patents.

“Companies speak publicly of innovation all the time. Thirty-two patents in four years shows that we act on that conversation and Raymond is truly invested in innovation,” said Field. “With this event, we are showcasing and honoring the people at Raymond who embody our philosophy of continuous improvement and innovation. Their dedication to this philosophy plays a large role in Raymond’s success today, and we thank them for that.”

Established more than 20 years ago, the Raymond Inventors Club currently comprises of an honorary group of 44 members, which are composed of Raymond employees and retirees, all of whom have been awarded patents throughout the years. During the recognition event, seven of the 19 engineers were newly inducted into the Inventors Club.