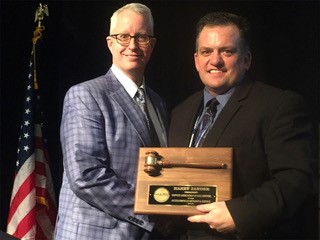 New MARS President Tom Surma, right, is congratulated by outgoing president Harry Zander, who was honored for his leadership at the 2019 Winter Meeting in January.

The Midwest Association of Rail Shippers (MARS) elected its 2019 slate of officers at the annual winter meeting earlier in January.

D’Andrae Larry of BNSF was newly elected to the MARS Executive Committee.

An outstanding attendance of 850 marked the two-day 2019 Winter Meeting in Lombard, Illinois, where the officers were elected. MARS 2019 Annual Summer Meeting will be held July 15–16 at the Grand Geneva Resort, Lake Geneva, Wisconsin. Information will be available at www.mwrailshippers.com in the coming months.