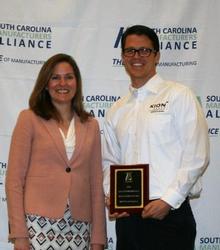 The South Carolina Manufacturers Alliance is a statewide organization dedicated to the interest of manufacturers. It contains more than 200 manufacturing companies that represent more than 80,000 associates throughout the state.

The award is based on the total recordable cases rate-a statistic tracked by the Occupational Safety and Health Administration (OSHA). KION North America’s rate was better than the industry average for companies in the same classification. To date, KION North America has worked over 57,600 hours since their last incident.

“We make a conscious team effort to ensure everyone goes home safely,” said Vome. “Without each individual employees contribution from the administrative areas to the operating floors, recognition like this would not be possible.”

KION North America was recognized at the event along with other prominent manufacturers including Bridgestone, Sonoco Plastics and Duke Energy Corporation.

According to a press release from the SCMA in January, manufacturers are held to high standards when it comes to achieving the Annual Safety Award. “South Carolina manufacturers have continued to demonstrate their commitment to safety each day,” said Lewis Gossett, president and CEO of the South Carolina Manufacturers Alliance. “We are proud to present these awards to our members because it demonstrates our efforts to ensure the overall well-being of our associates.”