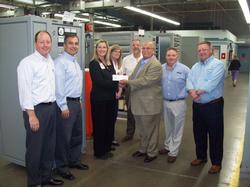 AMETEK, Inc., has donated $25,000 to a scholarship fund created for the Ohio State University’s College of Engineering and the Max M. Fisher College of Business in honor of the late Helmut Friedlaender, who served on AMETEK’s Board of Directors for more than 50 years.

The donation was made on behalf of the AMETEK Power Systems and Instruments Division (PSID), which was recently recognized by AMETEK with the Helmut N. Friedlaender Leadership Award. The award is presented annually to an AMETEK Divisional Management Team that has demonstrated outstanding performance against specific leadership objectives.

In addition to the award, AMETEK donates $25,000 on behalf of the winning division to an academic institution or university of its choice. Two PSID business units—Prestolite Power of Troy, OH, and Solidstate Controls of Columbus, OH— agreed to donate the award to the Ohio State University.

The two businesses, along with other units in the Division, were recognized for improvements they have made over the past year “in identifying and developing potential leaders and in focusing on diversity and inclusion in hiring and promotion,” according to John Ely, Marketing Manager for Solidstate Controls.

“We are very proud of our division’s accomplishments and even more pleased to use this donation to contribute to the education of the future business and engineering leaders,” comments Jim Lichtenberg, Business Manager for Prestolite Power.