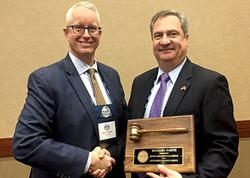 The Midwest Association of Rail Shippers (MARS) elected its 2018 slate of officers at the annual winter meeting earlier in January.   The 2018 MARS officers are: