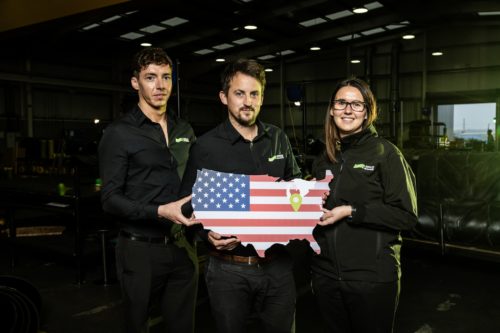 In a move driven by customer demand and strong industry forecasts, leading conveyor belt producers, Smiley Monroe has announced the opening of a manufacturing facility in Franklin, Kentucky.  This $2m investment, assisted by Danske Bank and the Commonwealth of Kentucky, will create 30 new full-time jobs in the local area, as well as safeguarding jobs at the company’s headquarters in Lisburn, Northern Ireland.

Over the past 40 years the company has grown to become the leading producer of highly customised Endless Conveyor Belts and Custom Rubber and Plastic parts to the mobile equipment sector, exporting to over 60 countries and supporting leading customers such as Powerscreen, Terex, Wirtgen, McCloskey, Astec Industries, Sandvik and CDE.  The group’s success to date has been born out of a philosophy of staying close to its customers. With a growing customer base in the region and increasing political uncertainty / export restrictions manufacturing ‘in America for America’ was a natural strategic move. Smiley Monroe has all the pieces in place to be producing in the US by January 2020.

With the political uncertainty both in the UK and beyond, protecting our export sales is paramount to growing the business and safe-guarding jobs in Northern Ireland.’ comments Chris Monroe, the group’s Global Sales Director. Having a base in the US will shorten lead times for customers and help us be more competitive in the tough US market. Removing barriers to trade will fast track our ambitious growth plans to increase turnover by 50% over the next three years.”

Proximity to major customers, an available workforce combined with the financial and logistical assistance offered by the Commonwealth of Kentucky were the deciding factors when the base was chosen for Smiley Monroe Inc. The company will be working closely with Simpson County in the coming months to recruit a core team of Production Operatives and Support staff with employee numbers set to expand to 30 over the next 5 years as the operation ramps up.

Smiley Monroe are no strangers to global expansion, with the new American facility mimicking the company’s successful India based factory. Initially this plant will produce the company’s core product -Endless Conveyor Belts as well as ‘Zip Clip®’ the mechanically fastened replacement belt which is taking the industry by storm.  Many support services and non-core products will still be provided from Smiley Monroe’s Northern Ireland headquarters who will continue to service their local, International and European customers.