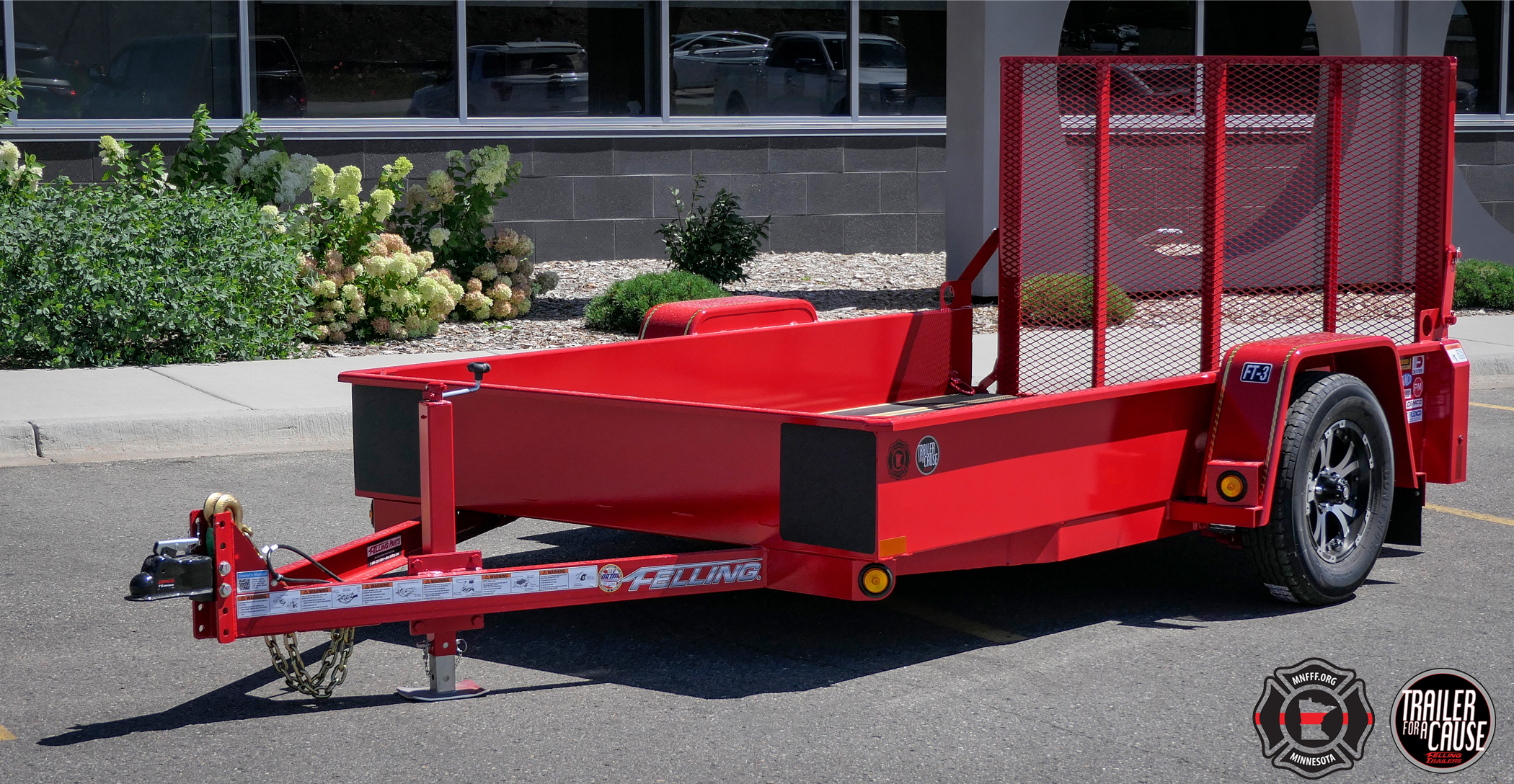 Pictured above is the 2021 Trailer for a Cause, FT-3 utility trailer.

Backing the Red, Felling Trailers announces 2021 Trailer for a Cause Auction dates

Felling Trailers, Inc. is conducting its ninth annual online auction of an FT-3 drop deck utility trailer to benefit a non-profit organization. Minnesota Fire Fighters Foundation is the 2021 recipient. Felling Trailers wants to help generate awareness about the hidden health dangers and cancer risks firefighters face while serving and beyond.  Thus, Felling Trailers manufactured and painted one of its most popular trailers, the signature fire engine red with custom fire engine gold pinstriping, and bears the Minnesota Fire Fighters Foundation emblem. The online auction of the trailer will run for seven days: September 5th thru September 11th. Several Felling Trailers’ suppliers have joined to support MNFFF by sponsoring the trailer build, from lighting to tires to decking. The 2021 Trailer for a Cause sponsors are: Trans-Texas, PPG, Dexter, Sealco, Peterson, Industrial Wood, Demco, Pacific Rim, and Metal Crafters/Flexco. One hundred percent of the winning bid will benefit the Minnesota Fire Fighters Foundation!

MNFFF’s mission is to provide funding and resources for Fire Departments to obtain the best available equipment, technology, and training. They are dedicated to helping maintain the highest level of public safety in their communities. The State of Minnesota has 774 Fire Departments. MNFFF’s Hoods 4 Heroes campaign goal is to provide 500 particulate hoods to those departments who cannot afford this type of PPE (personal protective equipment) or have applied for grants and been denied.  A particulate hood protects firefighters from absorbing dangerous chemicals into their skin, covering the area around the head, neck, and ears, preventing carcinogens found in smoke from getting on the neck and head areas. “Each Year, over 70 Firefighters die in the line of duty. Since 9/11, over 7000 Firefighters have been Diagnosed with some form of Cancer or a Disabling Health Diagnosis. These hoods are a minor step towards cancer mitigation and prevention. Cancer has become the number one killer of fire service members outpacing cardiac arrest in most recent years,” said Tim Trainor, Minnesota Fire Fighters Foundation President.

The Trailer for a Cause auction will start on Sunday, September 5th at noon, running for seven days, ending Saturday, September 11th at 7 pm at the MNFFF’s 4th annual golf fundraiser for their Hoods 4 Heroes campaign. The online auction can be viewed at https://www.felling.com/our-company/trailer-for-a-cause/. Arrangements to be made for pick up at Felling Trailers’ manufacturing facility or delivery (freight extra).

About the Minnesota Firefighters Foundation

After receiving training on the Health Risk to Firefighters in 2016, a small group of individuals felt compelled to do more for their brothers and sisters in the fire service. The founding five members piled into a small room and knew at that time there needed to be more focus on the hidden health and cancer risk firefighters faced. In early 2017 The Minnesota Firefighters Foundation was formed, and

its mission is simple. Supporting firefighters and their families that have been affected by cancer and other health issues due to their involvement in the fire service. MNFFF’s primary campaign is HOODS 4 HEROES, which educates firefighters on how to protect themselves, along with giving them

the tools and equipment to help mitigate the risk of cancer and other hidden health risks. The HOODS 4 HEROES campaign mission is to purchase particulate hoods for fire departments across Minnesota that cannot afford them.