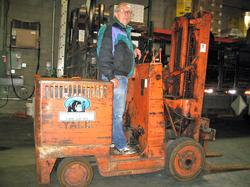 It’s not every day that you come across a lift truck that has been in continuous operation for more than six decades. Yale Materials Handling Corporation has located the oldest-known operational Yale® lift truck in the U.S. at J.A. Cunningham Equipment Inc. in York, Penn. The lift truck was manufactured in 1945. “The fact that this lift truck has been around so long attests not only to the history and quality of Yale lift trucks, but also to the quality of our dealer service,” said Bill Pfleger, president of Yale Distribution. “We’re proud of our trucks and especially our technicians and dealers that keep our trucks in good condition for many years of dependable service. A great truck doesn’t end at the forks, but extends to the Yale team that supports it.” “My father purchased the forklift used in 1966,” said Paul Cunningham, president of J.A. Cunningham Equipment Inc., “When I took over the family business, there was never a need to replace the truck. It has always been as durable as the other Yale models we have.” The Yale model K41-4M forklift has the capacity to lift approximately 3,000 lbs. and has carried skids of welding wires and other equipment for more than 60 years. The lift truck has never required extremely expensive repairs and functions right alongside their newer model Yale lifts trucks. J. A. Cunningham uses Eastern Lift Truck Company, a Yale® dealer headquartered in Maple Shade, N.J., with 11 locations, including York, Penn., to service their lift trucks. “I first learned of this forklift when I joined our dealership back in 1986 and remember this truck quite well,” said Mike Edmonds, Marketing Manager of Eastern Lift Truck. “We used to joke about our road technicians not being ‘real’ mechanics until they serviced this forklift: locating and lubing all 75 high-pressure grease fittings.”

While the lift truck is still operational when called upon, J.A. Cunningham has mainly retired the truck in lieu of another Yale lift truck. The previously oldest-known lift truck in operation was discovered at Kliegal Machine Company in Big Flats, N.Y. that was manufactured in 1953.

Yale welcomes information and images regarding potentially older operational models of its lift trucks. Those materials can be submitted by completing the Yale contact form, or by emailing Ryan Fisher at ryan.fisher@jacksonmg.com.