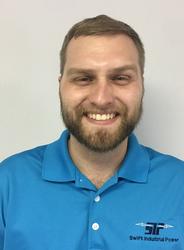 Swift Industrial Power has announced the addition of Chad Bevis to the team in its Birmingham and north Alabama regions.

Bevis has been hired as a customer service representative for the region, and will work closely with customers to make certain they are provided optimal solutions to meet their everyday power needs. According to Chris Jourdan, Swift Industrial Power General Manager, the addition of Bevis has solidified the Birmingham branch’s commitment to its customers.

“Chad is a great addition to our team in Birmingham, and his experience in customer service and industrial power applications make him a valuable part of Swift’s continued advancement in the region,” says Jourdan.

According to Jourdan, Bevis will be handling the promotion of battery and charger services, accessories and service contracts, as well as data collection and analysis for Swift Industrial Power’s monitored material handling power fleets.

“I am really looking forward to joining the team here in Birmingham,” says Bevis. “Swift Industrial Power has continuously proven its dedication to its customers and employees, and I am excited to promote its reputation for excellence in the industrial power industry.”