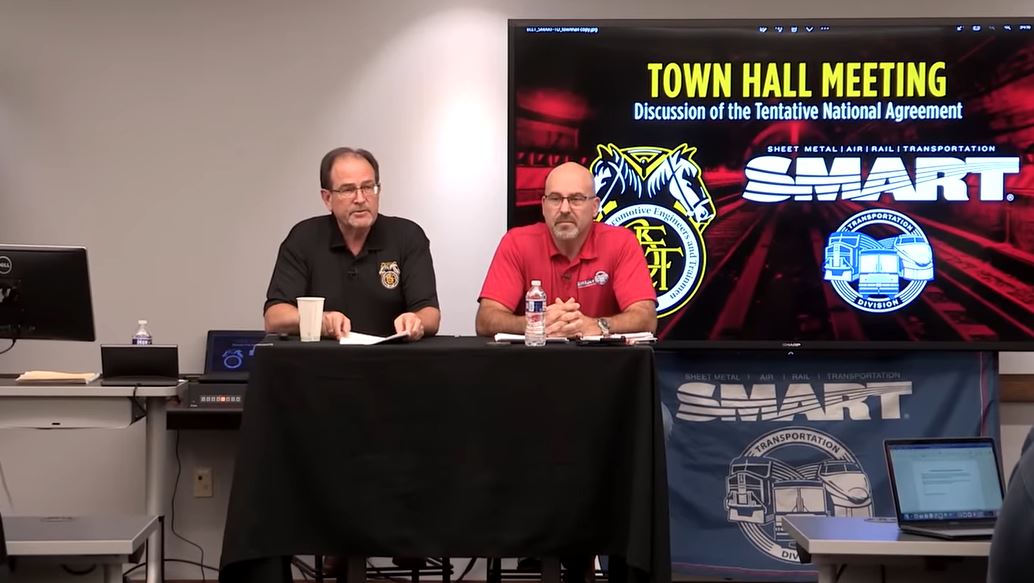 Brotherhood of Locomotive Engineers and Trainmen (BLE-T) President Dennis Pierce and SMART Transportation Division President Jeremy Ferguson held a town hall meeting last week on the tentative National Rail Agreement being voted on by members of the two unions. Ballots are out, voting on the tentative agreements concludes on Nov. 20 and results will be announced on Nov. 21.

Dennis Pierce, the president of the Brotherhood of Locomotive Engineers and Trainmen, has held 20 town hall meetings over the past month in an effort to answer questions and help explain to BLE-T members what’s contained in the tentative National Rail Agreement reached in September with Class I railroads.  On November 9, President Pierce was joined by Jeremy Ferguson, the president of the SMART Transportation Division at a town hall meeting held near Cleveland, Ohio.

Among the topics discussed in the town hall are hardball tactics by the railroads and their failed attempt at eliminating conductors from trains (crew consist), attendance policies, sick leave, wages, and changes in healthcare benefits. Also discussed is what was gained through the Presidential Emergency Board recommendations and what was not; what happens if the tentative agreements are not approved; actions Congress may or may not take at the end of a cooling off period if an agreement is not ratified by BLE-T, SMART-TD or other rail unions.

Ballots are now out for a contract ratification vote by BLE-T and SMART-TD members. Voting ends on November 20 and results will be announced by the two largest rail unions on the morning of November 21.