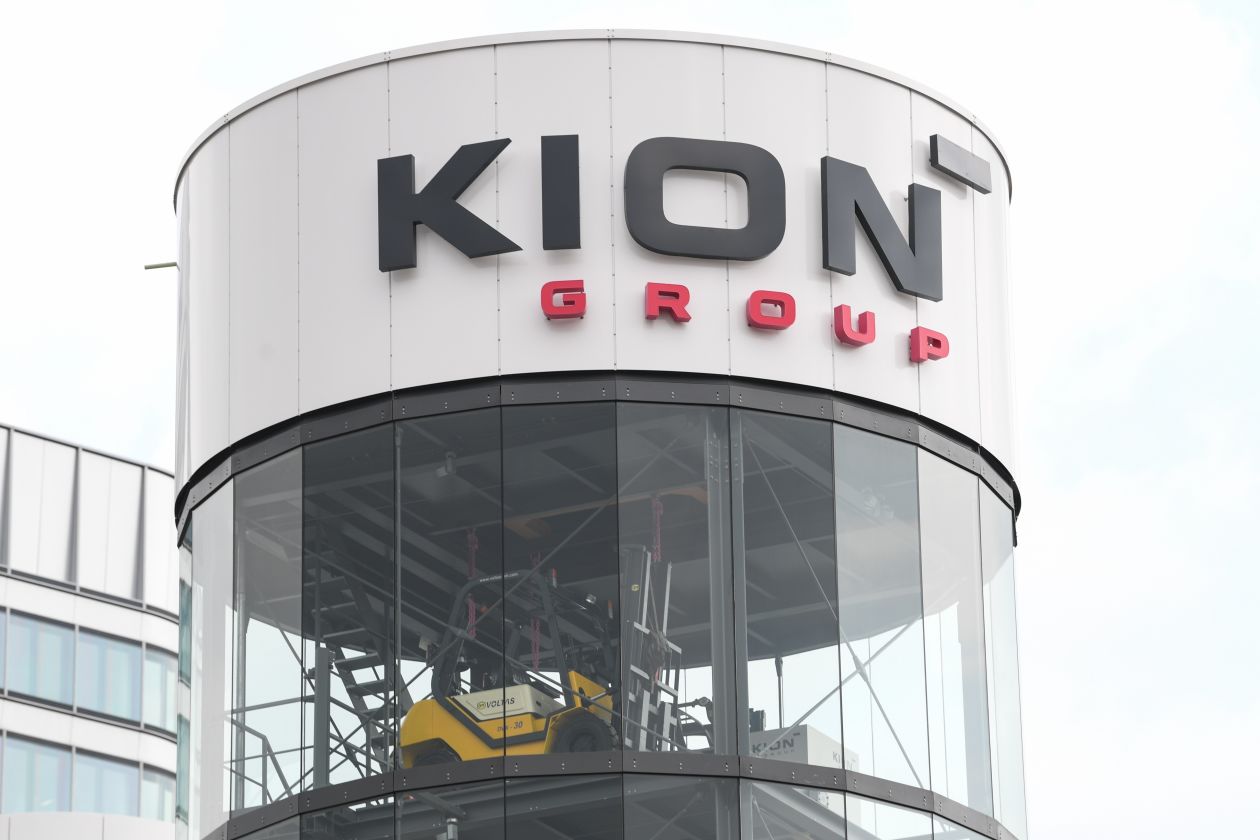 KION Group invests significantly in its medium- and long-term growth

KION Group invests significantly in its medium- and long-term growth

– New factory in China and acquisition of software company DAI

– Targets in the outlook for 2019 fully achieved and, in some cases, significantly exceeded

– Free cash flow much better than expected at €568.4 million

Following an extremely successful 2019 in which KION Group fully achieved its targets and, in some cases, significantly exceeded them, the Group is now stepping up capital expenditure in its two segments in order to drive its medium- and long-term growth. The sustained expansion of business in China is a key part of the KION Group’s growth strategy. The construction of a further factory for counterbalance trucks in the eastern Chinese city of Jinan will enable the Group to broaden its product portfolio in one of the most important markets. To this end, the KION Group and its anchor investor Weichai Power have established a new company in which the KION Group has a stake of 95 percent and Weichai Power 5 percent. This move should enable the Group to capitalize on opportunities for growth in the value segment and on the increasing electrification of industrial trucks in China. The KION Group will invest around €100 million and create more than 800 new jobs at the new site in the province of Shandong by 2025. The new highly automated plant, the adjoining KION Value Competence Center, and the expansion of the sales and service network should enable the KION Group to significantly strengthen its position in this important market.

Yesterday, March 2, KION Group acquired all of the shares in UK software company Digital Applications International Limited (DAI), which specializes in logistics applications. The KION Group’s overall investment will amount to around €120 million. Due to the transaction structure, only €97 million cash will be effective at closing. Further payments will be made over a period of 3.5 years. In the 2019 financial year, DAI’s preliminary revenue was equivalent to approximately €40 million. DAI becomes part of the Supply Chain Solutions segment and will significantly expand Dematic’s software portfolio, which supports the transportation, storage, and distribution of goods right along the supply chain. By acquiring DAI, the KION Group will gain around 240 employees with extensive software expertise and specialist knowledge of logistics automation and supply chain engineering.

“These key strategic investments will strengthen our competitiveness for the long term and are the next logical step in the implementation of our KION 2027 strategy,” said Gordon Riske, Chief Executive Officer of KION GROUP AG. “In the long term, we predict that worldwide demand for industrial trucks will rise by round about 4 percent per year and that growth in demand for supply chain solutions will be in the high single digits. We will seize these opportunities by offering many new products, a broad portfolio, and an extensive range of services, software, and digital solutions.”

Outlook for the current year

The outlook for the fiscal year 2020 does not take into account possible effects from global pandemics like Covid-19 or comparable events, as a valid estimate of the resulting effects is not possible due to insufficient data.

The global material handling market is likely to see further strong growth in 2020 if economic conditions stabilize slightly as expected. The ongoing expansion of the supply chain solutions market and a stabilization of the global market for industrial trucks are primed to be the engines of growth. Overall, the global material handling market is once again expected to grow at a much faster rate than the global GDP. The KION Group believes that this is primarily because the fundamental growth drivers will remain intact, particularly the fragmentation of value chains and consumers’ increasing preference for e-commerce. Growth at a regional level, particularly in the cyclical market for industrial trucks, will again depend heavily on the economic conditions in the main sales markets.

Following the slight market correction in 2019, the KION Group is expecting new business with industrial trucks in terms of unit sales to hold steady in 2020 and, overall, to be below the long-term market growth rate of around 4 percent. Geopolitical tensions and global uncertainties remain a possibility in 2020. The KION Group is in an excellent position from which to take advantage of the continued progress that is expected in the electrification of warehouses. The high number of trucks in operation worldwide provides a sustainable customer base for the service business.

In 2020, demand for supply chain solutions in the form of warehouse automation is likely to again be underpinned by the strong inclination to invest seen in the main customer industries in connection with omnichannel and e-commerce strategies. In the medium-term, market growth is expected to be in the high single digits.

In 2020, the KION Group aims to build on its successful performance in 2019 and, based on the forecasts for market growth, record a moderate increase in revenue. The KION Group’s adjusted EBIT for 2020 will be adversely affected by the higher volume of strategic capital expenditure aimed at further expanding the business.

The KION Group enjoyed another successful year in 2019. It achieved all of the targets in its outlook, significantly exceeding them in some cases. The global manufacturer of industrial trucks, robotics, and automation technologies for material handling benefited from factors such as the sustained growth of e-commerce, which is resulting in extensive capital expenditure on warehousing and logistics facilities worldwide. Wide-ranging automation is becoming an increasingly important feature of supply chain solutions. The KION Group is excellently positioned in this area, because it is one of the world’s leading providers of automation systems and automated guided vehicle systems and, moreover, offers a full range of software and digital solutions.

Despite a very difficult market environment, the value of the KION Group’s order intake amounted to a record €9.11 billion in 2019, which was a year-on-year increase of 5.3 percent. This was attributable to a very good level of orders at the end of the year in both of the Group’s operating segments, Industrial Trucks & Services (IT&S) and Supply Chain Solutions (SCS). The order book grew by a substantial 10.0 percent to reach €3.63 billion as at December 31, 2019, compared with €3.30 billion a year earlier.

The Group’s revenue jumped by 10.1 percent to €8.81 billion in 2019, with both segments contributing to this increase. Adjusted EBIT rose by 7.7 percent to €850.5 million. The adjusted EBIT margin stood at 9.7 percent, which was slightly lower than the margin of 9.9 percent for 2018. This was because of disproportionately strong growth in new truck business and business solutions, which have narrower margins than the service business.

“We are one of the leading companies in our sector worldwide and, in 2019, we seized our opportunities and continued to press ahead with the KION 2027 strategy despite the challenging market conditions,” said Gordon Riske, CEO of the KION GROUP AG. “Building on our success in 2019, we will be focusing on capital expenditure for the future in the new financial year. We are setting a course for our medium- and long-term growth.”

The Executive Board and Supervisory Board of the KION Group will propose a dividend of €1.30 per share to the Annual General Meeting on May 12, 2020. The proposed figure is 10 cents higher than the previous dividend. This equates to a year-on-year rise of 8 percent and a dividend payout rate of around 34 percent of net income.

Business performance of the segments in detail

In the Industrial Trucks & Services segment (forklift trucks, warehouse trucks, and related services), the brand companies together took orders for 213.7 thousand new trucks in 2019. The significant market slowdown meant that the segment was unable to match the very high figure reported for 2018 of 216.7 thousand new trucks (down by 1.4 percent). The total value of order intake increased by 1.9 percent to €6.33 billion. This growth was primarily due to the expanding service business. Total segment revenue went up by 8.2 percent to €6.41 billion. Adjusted EBIT improved by 6.1 percent year on year to reach €695.1 million (2018: €655.4 million). The adjusted EBIT margin declined slightly, from 11.1 percent to 10.8 percent. The decrease in the adjusted EBIT margin was due to higher development costs for work on innovation and to the very robust new truck business, which generated much stronger growth than the higher-margin service business in the reporting year.

KION Group key performance indicators for 2019 and for the fourth quarter, which ended December 31, 2019