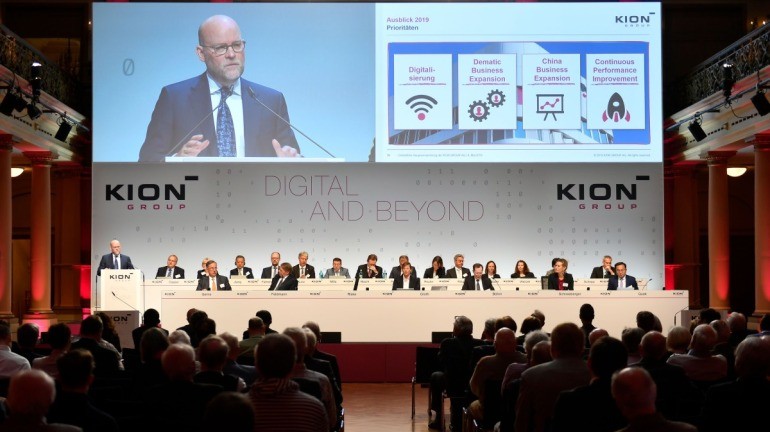 Annual General Meeting 2019: KION more than delivers on its promise

“With a clear focus on our strategy, not only have we made bold strides in developing our product and service portfolio, but we have been able to continue the growth course of the past few years, delivering what we promised,” concluded Gordon Riske, CEO at KION Group AG, at the Annual General Meeting (AGM) May 9, adding, “and our shareholders also benefit from this direction.”

The Group’s AGM was held at the Palmengarten in the heart of Frankfurt. The approximately 130 shareholders were greeted by company flags and logos as they arrived. The Supervisory Board chairman, John Feldmann, opened the meeting as scheduled at 10 am.

The agenda included the presentation of the Group’s various financial statements and reports for the past fiscal year. There was good news for shareholders regarding the appropriation of retained earnings: the dividend was increased by roughly 21 percent compared to the previous year and amounts to EUR 1.20 for fiscal year 2018. The increase thus continues the Group’s dividend policy trend of recent years.

In his speech, Riske gave an overview of the latest developments and initiatives. One important topic was digitilization, where the Group has taken a decisive set of actions over the last few months. The Group head provided several examples including, the establishment of the Chief Digital Officer position and membership on the Executive Board with Susanna Schneeberger filling the newly created role in late 2018. In terms of solutions, Riske mentioned Dematic iQ Virtual, iQ InSights and the new KION Cloud, which have all recently been introduced to the market. In addition, the KION Digital Campus, launched in the spring of 2018 has been continuously developing new solutions in collaboration with the various operational units, including a chatbot application for Linde service technicians, a STILL application for data-based fleet optimization and the establishment of the KION Digital Academy, a new forum offering trainings to KION employees. The examples are evidence that digitilization is not only anchored in the long-term KION 2027 Strategy, but is already being “lived” within the Group, noted Riske.

“Sooner rather than later, digital transformation will become the decisive factor for many industries and organizations. It will also massively change and shape intralogistics,” stressed Riske. Innovative supply chains will become a differentiator in terms of having a competitive edge in tomorrow’s internet economy. The CEO has a positive outlook for his company’s future. It is excellently equipped for the coming years to profit from global mega-trends. The main drivers remain, particularly, the consistent adaptation of many consumers towards online purchasing – or eCommerce shopping – as well as the increasingly fragmented supply chains of the global economy. Thus, Riske is convinced that the Group is well positioned to continue adding chapters to its current success story in the coming years.

After the AGM session, which gave shareholders the opportunity to have their questions answered by both the chairman of the Supervisory Board as well as the Executive Board, elections were then held. With wide approval, the voters released the Management Board and the Supervisory Board and appointed Deloitte as auditor for the financial year 2019. Dr. Michael Macht and Tan Xuguang were elected to the Supervisory Board. Dr. John Feldmann, who ended his mandate as chairman of the Supervisory Board after roughly eight years, bid farewell to the shareholders. “It was both a duty and an honor for me to be this great company’s Supervisory Board chairman,” said the outgoing Feldmann. Next, on behalf of the Executive Board, the entire workforce and the shareholders, Riske thanked him for his dedication. He has had a decisive influence on the development of the company, which today has all the ingredients for future success. “You have every reason to proudly follow the future development in the coming years of the KION Group you help build.”

He has been a non-executive member of the Board of Directors at Weichai Power since June 2018. “We are delighted that Dr. Macht has been appointed our next chairman. In his new role, he will build on the long-term continuity at the top of our Supervisory Board,” stressed Riske.