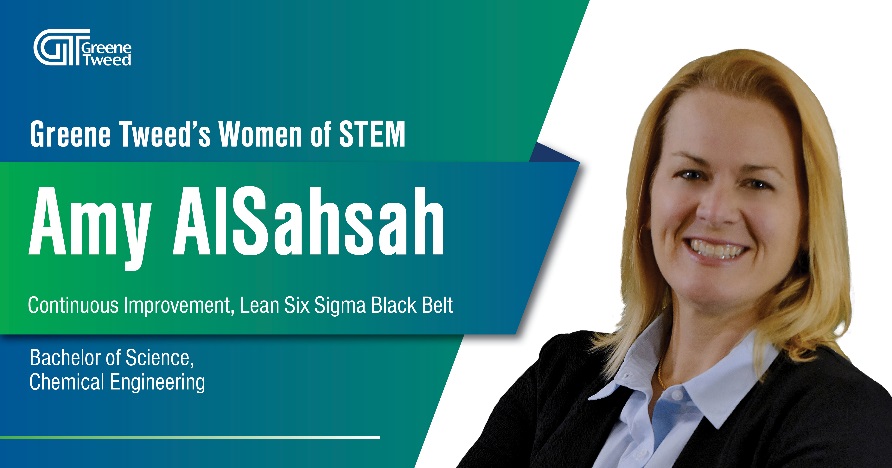 During her career, Amy AlSahsah has certified over 300 candidates in Lean Six Sigma from White Belt to Black Belt. Her first Black Belt project saved $995,000 in one year and increased the product’s profitability. The team she led eliminated a source of contamination that had caused a line stop issue, and reconfigured the inspection process to mitigate similar issues moving forward. However, AlSahsah finds “there are still people out there with preconceived notions about what an engineer looks like,” and still a lack of awareness of what engineers actually do. That’s why the mother and Greene Tweed engineer actively encourages women to pursue STEM fields.

AlSahsah has a passion for continuous improvement, and uses her expertise in Six Sigma’s define, measure, analyze, improve and control (DMAIC) methodologies and lean manufacturing/ management techniques to meet problems head on and solve them creatively using the combined talents of engineers and shop floor associates.

One of several full-time employees responsible for continuous improvement at the Kulpsville site, AlSahsah supports manufacturing with projects that save money and eliminate waste. “One of my prior roles as a process engineer for seven years at a small chemical plant has really paid dividends because it enables me to mentor and coach other process engineers in ways they can make improvements.”

Another recent project to reduce scrap saved $2.2 million in a year. AlSahsah led a 20–30-person cross functional team looking for ways to reduce obsolete inventory.  Diving deeply into past customer orders, they worked with the production, quality, planning, and methods groups, along with SAP programmers, to introduce better methods for systematic product scrap planning.

AlSahsah has found that, as a woman managing production on the floor, she is typically perceived as being easily approachable. “People feel they can tell you things about finding problems and variations. There is perhaps an inherent trust that I am listening and might do something to correct the issue identified.” She adds, “Women are good at connecting and coordinating activities, and, especially with project management. This natural inclination is a distinct advantage.”

On a personal note, AlSahsah credits her non-traditional career choice with her background, especially helping in the family machine shop and insulation business, which propelled her initial interest in continuous improvement and how it can enhance the bottom line. She worked on the family cars and did yardwork, as well as learning traditionally female domestic duties such as cooking and crafts.  She can change the oil in the car, fix the toilet, or sew a button back on.  Side note: AlSahsah has systems for everything, from loading the dishwasher to maintaining her cars!

In college, AlSahsah was initially a chemistry major, but quickly realized that she wanted to work in production. She switched to chemical engineering in her second year and never looked back.

Her first engineering supervisor, also a chemical engineer, mentored her to problem solve by quickly getting to root causes. From another mentor and supervisor, she learned about Total Quality Management and became passionate about both quality and continuous improvement.

Today, she participates in a number of events to encourage women to pursue STEM fields – starting with speaking at her own daughter’s middle school STEM day and actively supporting take your daughter to work events.

She also interacts with the local technical high school, and participates in the Society of Women Engineers chapter at her alma mater, Lafayette College. The group supports numerous middle school activities, an engineering week, and a science fair, as well as providing scholarships and awards. She also gives advice to individual chapter members, questioning whether they should pursue application versus process engineering, and answers their questions about which courses to take. Says AlSahsah, “I also will mentor anyone who comes along and asks for advice for their children or my daughter’s friends!”

“You Can Be Anything If You Are First an Engineer”

AlSahsah advises all girls that it is far easier to become an engineer or scientist first, and then use that background to accomplish anything else they want. “Being a good problem solver is priceless – it will take your whole life in a positive path. You can be anything if you are first an engineer – doctor, lawyer, nurse, accountant, artist, author, or marketing and sales professional. Going the other way is not always doable. Do it even though it is hard – That is what makes you grow!”