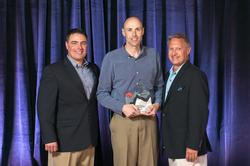 UniCarriers Americas Corporation (UCA) announced Richard Mustico of CFE Equipment as the winner of its prestigious Pinnacle Award for sales achievement in 2014.

Mustico, who is a sales representative at CFE Equipment in Norfolk, Va., was nominated for the award by Tony Sessa, dealer principal of CFE. During Mustico’s 11-year tenure in the material handling equipment industry, his substantial equipment sales have earned him recognition as one of the leading sales professionals at his dealership for the past eight years, and his persistence and salesmanship resulted in a multiyear agreement with a large account, generating not only considerable forklift unit sales, but valuable aftermarket opportunities.

“The Pinnacle Award is the highest recognition that UniCarriers Americas can bestow upon an individual. Those who receive this award represent the very best and most successful professionals in the material handling industry,” said Steve Cianci, vice president of sales and marketing at UCA. “We have the utmost respect for Rich and his achievements thus far in his young career in the industry. Congratulations to Rich and CFE Equipment.”

Mustico’s nomination was made based on five characteristics that set him apart as a sales professional: discipline, integrity, reliability, collaboration and passion for his profession.

“Rich represents characteristics found only in the most successful sales professionals,” Sessa explained. “He sets aggressive goals for himself and consistently meets them. His customers trust that he will provide honest guidance in selecting the right equipment for their needs. And he understands that it takes a team to create exemplary customer service and successful, long-term relationships.”

The 2014 Pinnacle Award was presented to Mustico at UCA’s annual Pack for the Sun event in Cabo San Lucas, Mexico.