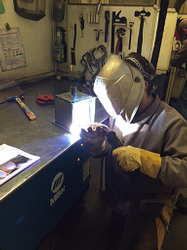 The Raymond Corporation is raising the bar for welding standards by recently challenging employees to compete in its first in-house welding competition and contributing to a welding competition at New York State SkillsUSA. Nearly 30 Raymond welders participated in the company’s welding contest in March. The competition included a written test and a skills test, which required each participant to weld a pressure vessel. The three welders who earned a plaque and cash prize were Mark Hartwig, first place; Justin Davis, second place; and Kyle Baldwin, third place.

This contest was based on a supplier welding competition that our parent company, Toyota Industries Corporation, holds yearly in Japan,” says Jim Cirigliano, manager of welding operations at The Raymond Corporation. “We studied Toyota’s competition in Japan and turned it into something that we could use at our Greene facility.”

Raymond also reviewed results from the contest to identify ways to continuously improve its welding department.

Our company has one of the largest welding departments in New York state, which means continuous improvement and skills knowledge are a priority,” says Ruben Sitts, welding manager for The Raymond Corporation. “By taking what we learned from the competition and translating it into actionable items, our employees will continue to create the highest quality products for our customers.”

With lessons learned from its own competition, Raymond helped implement tests at the New York State SkillsUSA welder competition on April 23 in Syracuse, New York. There, student participants completed a written test and a skills test, during which they welded a pressure vessel. They were assessed on teamwork, oral presentation and safety.