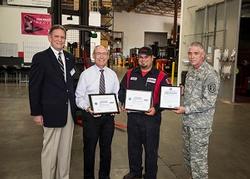 Raymond Handling Concepts Corporation announced it received the Patriot Employer Award from the Employer Support of the Guard and Reserve (ESGR), an agency of the Department of Defense. The award was nominated by one of Raymond Handling Concepts employees; Sgt. Mike Pasquale, ARNG and reflects the high level of support it has shown for its employees serving in the United States Armed Forces Guard and Reserve.

“We are extremely honored to receive this recognition, even though supporting our employees who serve in the Guard and Reserve is something we are committed to do, regardless of laws or awards,” said Steve Raymond, President of Raymond Handling Concepts Corporation. “This award recognizes employers like us who continue to provide outstanding support for our employees, simply because it is the right thing to do and because it is smart business.”

The Uniformed Services Employment and Reemployment Rights Act (USERRA) is the federal law that establishes the rights and responsibilities for almost half of the United States Armed Forces that is comprised from members of the Guard and Reserve and their civilian employers.  The Department of Defense shares these citizen soldiers with their civilian employers, many of whom provide significant support to their employees who are proudly serving in the Guard and Reserve.