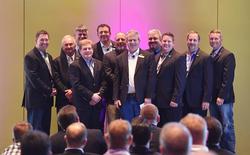 KION North America Corporation awarded their top dealers based on 2016 performance at an exclusive, private event held at Harry Caray’s in Chicago on Apr. 5.

The Class Act Award was given to dealers who purchased trucks in each of the five classes. Class Act Award recipients are as follows: Bohnert Equipment, Equipment Depot of Ohio, Hansler Industries, Hodge Material Handling, Manutention Quebec, Inc. and Wisconsin Lift Truck.